Avraham Bar-Av (Bentata), a native of Egypt, lives in Mitzpeh Adi in the Galilee. Bar-Av studied at Tel Aviv University's Theater Department. While still a student, he was awarded a monetary prize designed to allow him to write for the theater. As a student, he was also involved in the establishment of a fringe theater-group that put on some short plays he wrote and directed.

Ba-Av wrote and directed plays including The Floating Circus and Hoof and Mouth Enterprise. Both were published by Bimat Kedem Publishers. Concurrently with writing for the theater, he wrote numerous short stories that were published in major literary magazines, such as Moznaym, Gag, Kav-Natuy, and Kivun Mizrah.

Bar-Av devoted seven years (2005-2011) researching and writing his sweeping historical-biographical novel 17 Sheikh Hamza Street, Cairo (Rimonim Publishers, 2011, 446 pp.). While the novel tells the story of the Bentata family, it is also the story of hundreds of thousands of Jews native to the Middle East who experienced the bitter reversal from a friendly, safe and wealthy life to an ugly saga of hatred, harassment and arbitrary arrests, ending either in flight or expulsion.

Readers and critics have raved about Bar-Av's novel. A few years after appearing in Hebrew it was translated into English and published via Amazon.

The author has been invited to speak about his book at Ben-Gurion University of the Negev, the University of Haifa and Bar-Ilan University. Segments of these talks were recorded and can be viewed on YouTube.

Bar-Av's collection of short stories, Moroccan Pushkin, which includes stories about his childhood in Egypt, won the 2013 Writers' Association Prize. 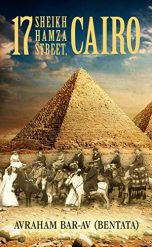