Yaron Yadan was born in 1961 and has eight children. He is a former ultraorthodox Rabbi and head of a Jewish seminar. He founded the Daat Emet movement for the promotion of enlightenment and education, and is the chairman of the Or political party, a contender for the Israeli parliament.

Yadan holds a bachelor’s degree in history and philosophy and a master’s degree in education. He lectures on the Bible and the Talmud, his papers have been published in several periodicals and can be found in many university libraries. 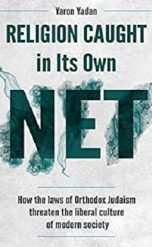