As she traces the path of her life, writing the stars’ waves and giving thanks for small moments of wonder, artist Talya Toker acts as the secret agent of her heart, focused on her goal of gathering reams of knowledge to pass on. When she first encountered the mysterious Tzolk’in calendar, she knew she had found the holy grail itself. Since then, for more than twenty years, Talya has attempted to decipher the formula that would allow her to melt out of time, believing if she delved deep into the Mayan wisdom she would find a way to disappear without having to die a physical death. She felt she could simply vanish live on prime time TV with her secret formula. Talya was insistent it surely must exist; this formula that would transform her into Merlin the wizard who waves his wand in the air and vanishes into nothing – proving the infiniteness of time itself!

Talya was initiated in Guatemala by Shaman Don Pedro Cruz of the Kytza Dynasty and was certified to teach by the Academy of the Maya. She holds a Bachelor’s degree in Philosophy from the Hebrew University of Jerusalem and specializes in reflexology and ABA. She is a certified instructor of Pilates and Bio-Ergonomy and has accumulated years of knowledge from her research of the brain, emotion, the body and mainly the mind and the subconscious.

For more than twenty years, Talya focused on writing the Mayan waves. Every thirteen days, without fail, she sat obsessively for long hours to write the approaching wave, which would express the flow of the present for the next thirteen days. Although the waves are repetitive and she could simply have copied them from the previous cycle, she insisted on writing them from scratch, adjusting and perfecting them, according to her insights at the time. At first, she wrote the waves as an expression of all knowledge, which she hoped would seep into her body and into her readers’ bodies too, until the moment when she realized that the entire calendar was a formula for being present in the Present, in the moment, again and again. Since then, she has developed a healing method based on the 20 Time Keys and works to certify instructors and therapists to use the method. She has written two books, The 20 Time Keys of the Mayan Waves and The Practical Guide to Developing Consciousness. Each day, she allows the world to paint her in its shapes, shades, and colors, and spends her time making small but significant gestures of generosity to herself and to others. 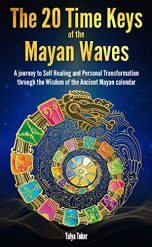