Prolific novelist and thinker Shlomo Kalo, one of the very few Israeli writers nominated for the Nobel Prize in Literature, has published 80 titles in a variety of genres and themes.

Kalo was born in 1928 in Sofia, Bulgaria. He joined the anti-Fascist underground before reaching his teens and wound up in a concentration camp at the age of 15. After studying medicine and working as a journalist in Prague, and training as a pilot for Mahal, he immigrated to Israel in 1949. He was awarded MSc in microbiology from Tel Aviv University in 1958. For 26 years and until his retirement, he worked as regional director of medical laboratories.

In 1969, a sharp turn in his life occurred. It subsequently affected his life, his thoughts and his highly prolific literary activity.

Shlomo Kalo wrote 80 titles, some of which were translated and published in 16 countries. He wrote novels, short fiction, literature for younger readers, non-fiction (philosophy, spirituality), a thriller and more. His short stories appeared in probably all literary magazines in Israel and the media often covered his writings and thoughts. Between the years 2008-2014 he was nominated for the Nobel Prize in Literature.

Shlomo Kalo died peacefully at his home on 8.30.2014. His last words were: “Everything is excellent for he who is not subjugated”. 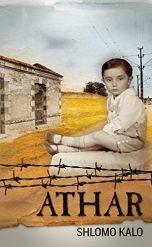