Shalva Hessel was raised in the town of Hibbat Zion in central Israel. She is a software engineer by profession and has managed data systems for companies around the world. When her husband, Yoram, who served in a senior role in the Mossad, was deployed on secret missions, she joined him as part of his cover. For these missions, she underwent continuous comprehensive operational training. Married to the Mossad tells her incredible true story, drawing on events she experienced, operations in which she took part, and her life in general. The book was under censor for a decade before it was released. Since its publication it has enjoyed massive popularity and has made the Israeli best seller list, where it has remained for the past four months. 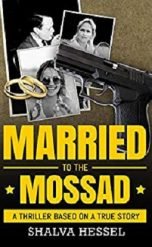