Rivka Gonen is a Jerusalemite whose family’s roots in Israel go back to the early nineteenth century. She was educated in a Jewish religious school for girls in which English was one of the two leading languages and the Bible was a primary subject. She has a Ph.D in archeology and lectured on archeology and the ancient Middle East at several Israeli universities and to audience in Israel and abroad.

As senior curator of Jewish Ethnography at the Israel Museum in Jerusalem, Dr. Gonen had developed deep interest and knowledge in ethnography, which eventually helped her delve deeply into the life depicted in her book ‘Rahab and Joshua – A Love Story.’ Though this book is her first attempt in writing fiction anchored in biblical history, she authored many books in her career, all of them of a more academic nature, published in English. They include the following: The Quest for the Ten Lost Tribes of Israel: To the Ends of the Earth; Contested Holiness: Jewish, Muslim, and Christian Perspective on the Temple Mount in Jerusalem; To Live in Jerusalem – a catalogue of an exhibition at the Israel Museum; Biblical Holy Places – An Illustrated Guide; Weapons and Warfare in Ancient Times; Making Pottery in Ancient Times. 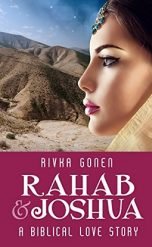