Reuven (Gutkin) Govrin, also known as Robby, is an attorney by profession and a graduate of a storytelling course at the Stage School of Acting at the Givatayim Theater near Tel Aviv, Israel. He is an avid reader of books on military history and aviation, active in the world of light sport aircraft, and an amateur pilot with a flight license on Ultralight. He is also a Latin dance fan (Salsa, Rueda De Casino) and practices long distance running, including participating in the 2015 Tel Aviv marathon.
Robby lives with his wife and children in Israel.
Wood, luck & survival is his first book, published in Hebrew in 2013 with the assistance of Yad Vashem – the Foundation for Supporting Memoirs of Holocaust Survivors.
His second book, published in Hebrew in 2016, gives a glimpse into the world of light sport aircraft and the experiences and relationships of Ultralight pilots. It describes an investigation into a Microlight crash, which reveals underlying circumstances that cast doubt on whether it was an accident at all. 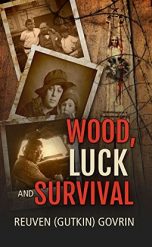