From Europe to Asia, from Bulgaria to The land of Israel, from a Bulgarian village to a moshav (a communal village) in Palestine, from WW2 to the Israeli War of Independence, from the Bulgarian snow to the mud in the Holy Land, from a Slavic language to a Semitic one, Grandma Rachel remembers it all.

Born in 1939, in Europe which was about to burst into flames, a Jewish girl in a world that rejected her kind, she was deported with her family from Sofia to some remote villages. Later she was lucky to escape the Hell of Europe and arrive with her family in the Land of Israel. After a few years of painful adjustment to the new surroundings, she found herself absorbing newcomer girls into Israel.

She becomes an Israeli: studies, marries, raises a family, teaches school, and only after retirement decides to tell her story. She is happy with her life today as a wife, mother and grandmother. The past with its difficulties is only a memory. She believes in the Future. 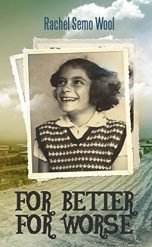