Meshulam Riklis, born December 2, 1923, is a US-Israeli businessman who was a shining star in the skies of the American and international business world. He studied mathematics at Ohio State University, graduating in 1950 and awarded his Master degree in Finance in 1966.
A prominent figure in the list of the world’s richest (Forbes 400), he was one of the 100 most important art collectors in the world. His business empire founded in the 60s, 70s and 80s, included some of the best known brands in the world, such as, Elizabeth Arden beauty & cosmetics products, Faberge unique jewelry creations , Cartier fine jewelry, Samsonite travel Luggage, Nellie Whiskey (Schenley Industries), Carnival Cruise Vacations Lines, McCrory retail Stores, Playtex personal care products, Riviera Hotel & Casino in Las Vegas, Beatrice Foods, Gruen Watches, and Odd Lot Trading (on the list of Fortune 500). His fortune at that time was estimated in the billions of dollars and his meteoric rise to fortune was well documented in the book “The Magic of Mergers; The Saga of Meshulam Riklis” published in 1968 by Oscar Schisgal 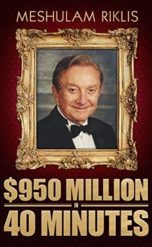