She also a serves on the board of Dorgaz and is the chairperson of its audit committee. For many years Liora has been an editor of books and periodicals, and initiated various business and cultural projects.

In addition, Liora is a devoted listener of classical and jazz music and is committed to the advancement of arts and culture. For over twenty years the chairperson of Helicon Society for the Advancement of Poetry in Israel. She is also a member of the board of the Harp and the Nightingale Foundation, and is among the founders of Jaffa Jazz Festival. Liora was the chairperson of Israel’s Society for Arts and Culture. She has served on various other boards, including the Janco Dada Museum, the School for Drama Authors, and the Interdisciplinary Forum on Urban Aesthetics in the City of Tel Aviv-Jaffa.

She brought up her two children as a single mother; remarrying only after her kids had grown up. All of her adult life Liora has raised dogs, and they are an integral part of her family and of the book “A Dog’s Luck”. This is her first novel. It was published first in Hebrew in September 2014 and was highly critically acclaimed in by media, by academic and countless readers. 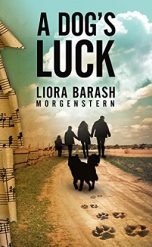