Giora Amir was born in Czehoslovakia in 1928.

When the country was divided in 1939 into German Proectorate in Bohemia and Moravia, Slovakia became a country under quasi German rule, a country governed by racial discrimination and under Nazi protection. When the deportation from Slovakia to ghettoes in Poland started, he escaped to Hungary – only to return to Slovakia a few years later, after the German army invaded Hungary and commenced the deportation of Hungarian Jews to Auschwitz. 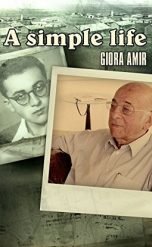