Danny Caspi is a physician and associate professor of medicine. Though fascinated by medicine he first studied trombone, and served in a travelling theatre group in the Israeli army. Later, with the Quintet Band, he played in hotels, clubs, and on a cruise boat. Fulfilling his other love, he graduated MD cum laude from the University of Padua, Italy, and specialized in internal medicine and rheumatology in Israel, postgraduate and research under Professor Sir Mark B. Pepys FRS, London. He was head of rheumatology at the Tel Aviv Medical Centre and presided over the Israeli Society of Rheumatology. He has published over 160 scientific papers.

Danny’s first poetry book (Internal Medicine) followed a 45 year pregnancy. He published short stories and poems in literary journals. His short story book, Sudden Break, won the Education Ministry’s prize for a début fiction. Four Winds of Love derived from his short story “An Interview with a Respirator,” whose 40-year-old narrator, ever delaying his queries about his late mother, eventually interviews his comatose aunt. Built on biographic scaffoldings and narrated by four voices, the novel’s heart is a unique woman, but its belly is desertion, longing, love, acceptance, and mercy throughout 60 years of tumultuous history.

Caspi is among the founders of the Ofer Lider Memorial Literary Contest and is on the editorial board of Poetry of Science, published by the Weizmann Institute of Science. Quoting from his own life experience: “The art of story reading enhances patient care, while the art of caring improves literature. Both belong to the same department: Humanities.” 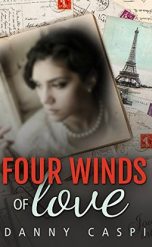