Dana V. Moison is an Amazon best-selling author. She was born in 1989, to an Israeli mother and an American father. While most of her family resides in the U.S., she was born and raised in Tel Aviv, Israel. Nevertheless, her frequent visits to her family in New York City have allowed her to experience the city as a local. New York had been the source of inspiration for her first novel, Dark Illusion, which takes place in Manhattan. In fact, quite a few chapters were handwritten at her favorite Starbucks, located in the basement floor of the Empire State Building. Soon enough she traded her ballpoint pen with a laptop and they haven’t been separated ever since.

Dana started working toward a degree in psychology during high school. She graduated with top honors and received her bachelor’s degree from the Open University after completing her military service as a psycho-technical diagnostician. Dana worked as one of the youngest columnists for Ynet, the #1 news website in Israel, before releasing her first novel at the age of 23.

In 2012 Dana moved to the French Alps to work, where she was able to polish her French and, against all odds, some pretty decent skiing skills. She kept writing her column while being abroad. When she returned to Israel, she enrolled in the gender studies program at Tel Aviv University. She graduated with top honors and earned her master’s degree at the age of 28.

In 2016, Dana released her second thriller novel in Hebrew, and due to the growing popularity of her first book, she started working on its translation as well. The False Mirror, Dana’s second book, is expected to be released in 2018. 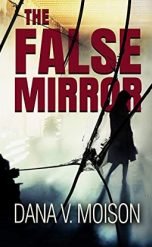