Arie Tamir, nicknamed Leosz, was born in Poland to a well-to-do family. World War II breaks out when he is all of seven years old, and for the next six years he undergoes all the levels of hell that the Holocaust brought upon the Jewish people.

The family first attempts to escape to eastern Poland. They reach in turn two cities – Lvov and Lublin which are heavily bombed. They then run to a village in which they spend several weeks and encounter the German army for the first time. Deciding to return to their home-town of Krakow, they spend the next year and a half living in an area full of German families. This German environment protects the family from harassment and anti-Jewish pogroms. During this time, Leosz lives in an illusion of being in one long adventure and even pretends at times to be a German child.

In March 1941, the family is forced into the Krakow Ghetto, where they live for the next two years Leosz undergoes an accelerated maturation process, learns to smuggle food and fight for his life, and is saved from three mass deportations to the death camps that catch most of his beloved aunts, uncles and cousins. With the liquidation of the ghetto in March 1943, when he is not even 11 years old, Leosz escapes alone, survives for several weeks while pretending to be a Polish street kid, and then hides for several months with a Christian family. At the end, he is caught and brought to the Plaszow labor camp to be executed. Miraculously, he manages to escape this death sentence as well, and is reunited with his father, mother and sister, who are all in the camp working as slave laborers.

For a year, he lives in Plaszow, battling daily to eat enough and survive. During this time, Leosz is saved from two “Actions” specifically aimed at catching children and sending them to their deaths. In August 1944, he is separated from his mother and sister and taken to the Gozen 2 camp in Austria together with his father.

Gozen 2 turns out to be human meat grinder, where torture, starvation, extremely hard labor, beatings and murder are the way of life. Leosz’s father is killed in this hell. Several weeks before the end of the war, Leosz is brought along with a group of other prisoners to a kind of secondary death camp right next to Mauthausen. Due to a lot of luck, good people, and resourcefulness, Leosz survives until the end of the war.

On May 5th, Leosz is freed by the American army, recovers quickly, returns to life, and enjoys his freedom with all his heart, mind and soul. 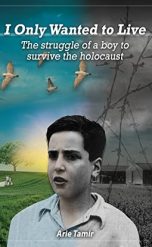