Amittai Megged is a well-known couples and family therapist in Israel. He is the director of two programs for the training of family and couple’s therapists in Israel, one is part of the Tel Hai Academic College and the other a private program in Herzliya.

Megged is a popular speaker and has appeared for several years at all the important conferences of family and couple’s therapists and social workers in Israel. He has given TED talks on the subjects of worthiness and worthiness-based psychotherapy, as well as several televised appearances on prime-time television.

Megged was a personal student of therapy pioneers Ivan Boszormani-Nagy and Dr. David Schnarch. His work has been described by experts as “refreshing, creative, and elegant”. 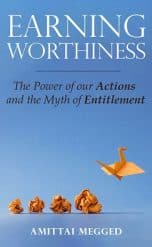